There are no items in your cart.

The Value of Touch

Average rating based on the following evaluation questions: 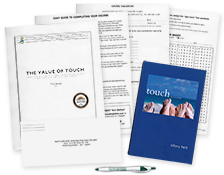 Materials and Test Shipped to You

Contents: Text and multiple-choice test shipped to you.

No Text (I Already Own Text) and Test Online

Contents: online multiple-choice test only.
(I already own "Touch" text.)

No Text (I Already Own Text) and Test Shipped

Contents: Multiple-choice test shipped only.
(I already own "Touch" text.)

Do you have the Touch textbook? See your enrollment options above for "I already own the text".

Based on a book written by Tiffany Field, PhD, the Director of the Touch Research Institute at the University of Miami School of Medicine, this course examines the value of touch from sociological, anthropological and physiological perspectives and presents recent significant research results on a variety of touch therapies.

"We also learned that we could predict postpartum depression by asking, "Do you and your partner want this baby?"  From our own research, we now know that postpartum depression, affecting as much as 80 percent of women, has terrible effects on newborns.  Babies born to depressed mothers show inferior performance on the Brazelton Neonatal Behavior Assessment, an examination that assesses the newborn's response to visual, auditory, social, and nonsocial stimulation, and the newborn's motor behavior, self-quieting, and reflexes.  These newborns are also less attentive and less responsive to faces, and their perception of auditory, tactile, and visual stimuli is less developed.  In addition, their EEG activity is similar to that of their adult mothers.  The differences at this early stage probably derive from these babies having been exposed to their mother's high levels of stress hormones during pregnancy, because at birth the newborns have the same high stress-hormone levels as their mothers.  After their birth, the depressed mothers touched their newborns less often than the nondepressed mothers.  When a mother's depression continues, the infant's growth and development are delayed.  If the mother is still depressed six months after the delivery, the infant typically weighs less than the norm, and at one year has lower Bayley mental and motor scale scores."  (Touch by Tiffany Field, 2001, p. 42-43) 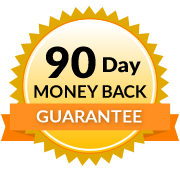 Enroll Risk-Free! Examine our courses for up to 90 days and if you're not 100% satisfied by the quality or our service, your full tuition cost will be cheerfully refunded. Learn more about our guarantee.

We will not rent/sell your email to anyone. You'll also receive our newsletter and special offers.

Signup for the Institute's newsletter to receive original massage articles you'll love to read and exclusive offers you'll want to use.

Rest assured, we will not rent your email to anyone.

I love taking your home courses. It is such a help to be able to do this on my own time. This is my 5th year! Your staff is also very pleasant and helpful. See you again in 2 years!

Online materials and/or tests can be accessed 24/7 at our secure, easy-to-use website.

To checkout, you are being forwarded to our secure shopping site at our parent company, the Institute for Integrative Healthcare Studies.

We will not rent/sell your email to anyone.
You'll also receive our newsletter and special offers.

Thank you! An email will be sent to the address provided with instructions on how to enroll in this 1 CE hour course - FREE!

If you do not see our email within a few minutes of signing up, please check your Spam/Junk folders it may have been delivered there instead of your inbox.